Daily Lives of High School Boys Wiki
Register
Don't have an account?
Sign In
in: Schools, World of Danshi Koukousei no Nichijou

Prefectural Sanada North High is an all-boys school and the high school attended by the main trio.

North High is located in a fairly large plot of land. From the main gate, a path leads straight to the academic building. There's a notice board on the left of the path and various greenery on the right. Also on the left is the school auditorium. The school name is engraved at the entrance. The main building is around 4 stories high with an east and west wing. The grounds lie behind.

The school was founded in 1989. Three years prior to the setting of the series, the current principal took over.[1]

Sanada North High’s uniform consists of a blue coat and pants, a white undershirt and a tie with alternate red-and-blue stripes. The coat is not a part of their summer uniform.

The school doesn’t seem to enforce the dress code very strictly. Various students are seen with un-tucked shirts, upturned collars and/or no ties.

Visitors to the school are expected to wear a pin-up visitor’s pass.

North High’s student council consists of a four-member team of second and third-years. They are involved in many duties in school, including organizing cultural festivals and even dealing with scandals. Known for their hard work and efficiency, they have a good reputation even among other schools. Their base of operations is the Student Council room. The group members themselves are good friends and sometimes hang out and go to eat as a team.

The student council room is neatly maintained and well-stocked with file cabinets, whiteboards, tables, chairs and a computer. The members usually convene here to hold meetings, study or spend time in leisure.

2-A is the class to which the main trio and their extended group belong. The class has over 30 single-seater desks. The windows on the left look out towards the school gate. At one point, Hidenori and Yoshitake occupy adjacent seats next to these windows.

The school has a large auditorium with wooden flooring and an elevated stage. During the school festivals, various performances are held onstage. It also doubles as an indoor sports area, since there are basketball hoop fixtures within.

Other locations shown around school are various club rooms, the grounds, and the principal's office, which has various trophies and pictures of previous principals. Signs around the school indicate the existence of a library, music room etc. 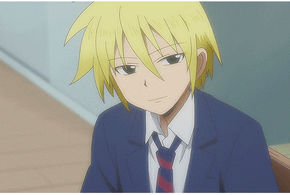 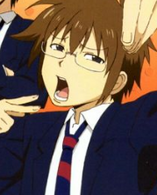 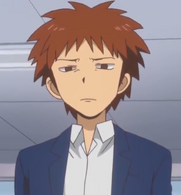 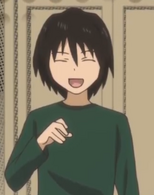 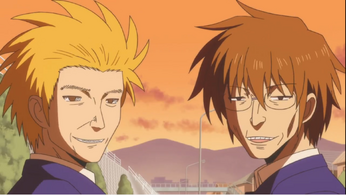 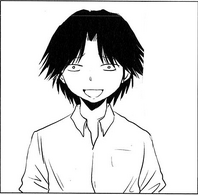