Nago is a student at Sanada Central High and a co-worker of Tadakuni and Yasunori at Pizza-Le.

Nago has brown eyes, medium-length black hair and wears rounded rectangular eyeglasses. She is rather tall and plump, and is depicted with wrinkles on her face in the manga. At work, she wears a red kerchief as a bandanna and removes it when she's going home.

Nago is generally reserved and composed. She sometimes gets annoyed by her male co-workers’ narcissism but doesn’t fail to humor them once in a while. She acts as a confidante to Tadakuni and gives him advice, sometimes getting exasperated with his self-conscious behaviour.

She also appears to be a diligent worker, both at her part-time job and in school.

Later in the series, a different Nago appears inside Central High. This Nago is depicted to be slimmer and does not have wrinkles, and different kanji characters are used in her name. She still has her glasses and, queerly, wears the red kerchief from the pizzeria in school, which the first Nago removes outside work. Being outranked by Nago in academics, Yanagin considers her as a rival and challenges her frequently. Despite not knowing who Yanagin is, Nago humors her challenger and surpasses her in every aspect.

Nago's pizzeria avatar does not make a return in the series after the second avatar's appearance. 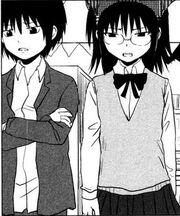 While the relationship between the two Nagos is up for debate, a scene in the epilogue of the manga depicts the second Nago with Tadakuni at the cultural festival, implying that they are one and the same.

Retrieved from "https://dailylivesofhighschoolboys.fandom.com/wiki/Nago?oldid=9125"
Community content is available under CC-BY-SA unless otherwise noted.