Mino[3] is Motoharu's older sister, who studies a year above him. She attends Sanada West High. Usually, she is seen asking Motoharu what to have for dinner and cooks for her brother since their parents are rarely at home. In the past, she loved to bully Motoharu. Even so, they get along well relative to most other sibling pairs in the show. 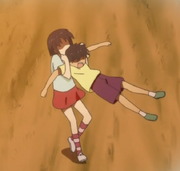 When Mino and Motoharu were in junior school, she used to bully him. This mainly occurred during a 'game' they played on the riverbank. In this game, she would pick up Motoharu by the arms and whirl him around repeatedly, laughing in glee. This source of amusement to her was torturous for Motoharu, who now becomes embarrassed when recollecting it.

Mino is short and slim, with long black hair. Due to this, she looks almost exactly like Yassan from behind. This once caused Motoharu to accidentally mistaken Yassan for her at the riverbank. Like the other sisters of North High students, her eyes are never depicted.

She wears Sanada West High's standard uniform for girls. It consists of a white, long-sleeved sailor fuku with a blue collar, red neckerchief and blue skirt. Sometimes she also wears a light-purple-colored jacket.

Mino is a cheery individual. She generally engages her younger brother in conversation and takes pride in the fact that the two seem to get along well. However, she also acts contrary to the spirit of that idea. She is known to spread lies about Motoharu to her friends, and also gets jealous of his cooking ability. When he was being harassed by her friends, she did not come to his aid. That being said, she didn't actively take part in humiliating him either.

Mino is good friends with Yoshitake's sister, who appears to be the only one not from West High in her immediate circle of friends. Yoshitake's sister is among the people invited to her house for a sleepover at one point, and when she humiliates Motoharu, Mino lets her have her way.[4]

The two, along with Tadakuni's younger sister, are also seen talking and attending the school festival together in the epilogue.[5]

Retrieved from "https://dailylivesofhighschoolboys.fandom.com/wiki/Mino?oldid=10202"
Community content is available under CC-BY-SA unless otherwise noted.