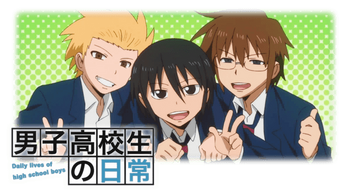 Daily Lives of High School Boys (男子高校生の日常Danshi Kōkōsei no Nichijou) is an anime adapted from the manga of the same name in 2012. The following is a list of episodes of the anime.

The manga was adapted to anime in the end of 2011. Eight five-minute pilot episodes were released on the Japanese anime website Nico Nico Douga from November 3 to December 22, 2011. The first episode of the official anime aired on January 10, 2012 in the Kantō region via TV Tokyo. The first season ended on March 27, 2012 with 12 episodes.

Each episode is about 25 minutes long and consists of several skits, which are usually independent stories. Each skit is about 2-7 minutes long. High School Girls are Funky shorts appeared at the end of episodes 3-12.