Tadakuni runs out of his house, late for school, with some toast in his mouth. While running, his inner monologue introduces himself as an ordinary boy leading an ordinary life. His friend Yoshitake joins him in a few moments, eating the previous night's leftover curry from a bowl while running, which is enough to startle Tadakuni. By then, their friend Hidenori also catches up and admonishes Yoshitake, claiming that when running late for school, one should only eat bread - while himself eating ramen out of a bowl using chopsticks. Tadakuni is flabbergasted.

When asked if something was wrong, Tadakuni is about to answer when an orange beam suddenly shoots down from the sky, followed by three Mobile Suit Gundams that jump down and start shooting, startling the three. The Gundam in the middle notices the three high-schoolers and shoots a beam which explodes right in front of them, sending them hurtling back. They then notice a book that lands in front of them, having exploded out of a box.

Tadakuni picks up the book, and the three correctly guess the title to be 'A Tale of Adventure'. Suddenly, they change costumes: Hidenori (in the middle) becomes a warrior, Yoshitake (to his right) becomes a fencer, and Tadakuni (to the left) becomes a female mage[note 1], with Hidenori claiming that they will be the opponents of the mobile suits.

Tadakuni then jumps in with a loud interjection and the scene changes to the boys sitting in his house, with Hidenori reading a book and Yoshitake playing on a DSi XL. The latter agrees with Tadakuni and asks Hidenori why he gets to be in the middle, to Tadakuni says there are bigger problems. Hidenori then tells them both that he heard that Square Enix and Sunrise were doing a collaboration to make an anime about them. Tadakuni then responds that the anime is about everyday 'normal life', and that mobile suits and adventures don’t come into it. Yoshitake then calls it boring, and Tadakuni yells at them not to discredit their own show.

Tadakuni asks Hidenori and Yoshitake how to get a girlfriend. The two launch into a simulation right away, in which Tadakuni meets a girl placing pamphlets on the desks after class while alone, with Yoshitake acting as the girl. Tadakuni decides he might as well take part. At a point when the awkwardness in the scene heightens, Hidenori bursts in. He acts as a female teacher who's interested in giving Tadakuni 'special lessons', but Tadakuni finds this too creepy and breaks character.

Seeing him falter, the others are ready to give up, but he is determined to retry. On the second go, Yoshitake drops the shy character from earlier and goes for the role of the stern class rep instead. However, he adds lines of his own asking Tadakuni which club he belonged to, causing Hidenori to burst in again and start arguing with him about changing the setting. They decide to try once more.

In the middle of round 3, Tadakuni falls silent. Instead of saying any lines, he thinks to himself that he didn't really want to know how to get a girlfriend. Noticing his lack of attention, Yoshitake looks like he's about to attack him, when Hidenori makes his entrance. However, he's completely different from before, this time acting as a very shy junior who wants to be alone with Tadakuni. This is too much for him and the act fails again.

Just as they're about to give up, Tadakuni comes up with his own solution. He grabs Yoshitake, addressing him as 'class rep', and runs up and down the house, with Hidenori encouraging him. After they stop, he says that he wanted to show her the scenery. The simulation is declared a success and Hidenori congratulates him, until Tadakuni points out that it was completely useless because they study at an all-boys school.

Hidenori monotones that the show is brought to the viewers lazily by the following sponsors”. Tadakuni interjects, telling him not to say ‘lazily’. During this, a message is shown on-screen that reads “'Danshi Kōkōsei no Nichijou' starts today. You don’t really have to remember the characters’ names or anything”.

Hidenori and Yoshitake are at Tadakuni's house, lounging around much to his annoyance. At his insistence, Hidenori is about to leave, but stops at the door and suddenly asks Yoshitake what he thought of skirts. Yoshitake begins to answer, but Tadakuni steps in and tells them to leave again.

However, he is too late. The duo are already lamenting in unison about how little coverage skirts provide and how shameful it is to be walking around that way. Tadakuni tells them to calm down, and they compose themselves. Hidenori then turns to him and asks if they could take his sister's skirts. Alarmed, he refuses, but Yoshitake has already found and picked them up. Tadakuni is even more shocked when he sees that Yoshitake has something else - his sister's underwear.

Hidenori and Yoshitake decide to put on the skirts, but end up cluelessly putting them over their heads at first. The two then get into an argument about whether it's okay to show one's leg hair. When Tadakuni intervenes and tells them to just get it over with, they label him a pervert for wanting to wear a skirt that badly.

Eventually, the three end up going into different rooms to try on the skirts, with Tadakuni resigned to his fate. They all come out red-faced, but as Tadakuni emerges, he is the only one who actually wore it. He attacks them in rage before breaking down and begging them once again to leave. To buck his confidence, he other two tell him he looks good in it. As he comes around, they even get him to pose for them, before deciding to step it up a notch.

At this point, Tadakuni's sister returns home. Hearing the commotion within his room, she opens the door, only to find her brother's friends trying to dress him in her underwear. Absolutely horrified, they begin to apologize profusely.

The trio are in Tadakuni's house, and Hidenori starts talking about something that happened to him. He says that he was once at an udon shop when a cute girl at the next table finished eating, and left... and on her bowl were three chopsticks. This somehow freaks out the other two, and they take it to be a scary story contest.

Yoshitake tells a story that is more painful than scary. He reminds the others of his 'well-known' concern about nipple hair (which they're hearing of for the first time) and recollects how he thought he'd shave them off with his dad's razor. However, an accident occurred, and he shows them a heavily bandaged left side of his chest, stunning them. He'd ended shaving off the entire nipple. Hidenori yells at him to seek medical help.

Tadakuni then talks about the time he saw an acquaintance throw up, and found a live centipede in the vomit. He tells the others that centipedes are unafraid of humans and might crawl into them during their sleep. Hearing this, Yoshitake and Hidenori are badly shaken. They get up to go to the bathroom and throw up as well, only to find Tadakuni's younger sister already vomiting there (she was eavesdropping on them). As the three are throwing up and checking their vomit for centipedes, Tadakuni wonders how he's going to tell them that he made up the story.

Hidenori comes to class and finds out from Yoshitake that Tadakuni hadn't reached school yet. Wondering what could have happened, he looks out the window and sees Tadakuni walking with a girl, and ends up falling over in shock and alerting everyone.

As their classmates see this and wonder how Tadakuni managed it, another student Motoharu (called a delinquent by the others) walks up to the window and sees the two. Analyzing aloud the way they were walking and their body language, he assures the others that the two aren't going out, but that it could soon change. They decide to take action.

As Tadakuni and the girl approach the gate, the others gang up on them and Motoharu asks a confused Tadakuni to tell them who the girl is. At that moment, the girl thanks Tadakuni, and he gives her further instructions to get to the station, making it clear that he was just giving her directions. The boys are embarrassed.

The Literary Girl is walking home while reading a book, when she sees Hidenori lying on the river bank holding a book up and reading. Hidenori realizes that reading by the river while waiting for his friends was a bad idea, as the wind kept ruffling the pages. As he sits up he notices that the girl has sat down behind him. A long silence ensues.

Hidenori is initially confused as to why the girl sat next to him, but guesses that she might be hoping for a fantastical romantic encounter by the riverside. Sensing the heightening awkwardness of the situation, he says a somewhat poetic line about the wind, which he feels really embarrassed about, but doesn't let show. She responds with an equally outlandish phrase, thereby confirming his suspicions. However, he now feels uncomfortable with the atmosphere that's been created and quietly calls the other two on his phone to rescue him. Yoshitake reaches first, and tries to call him away, but his line is unexpectedly witty and only increases the tension.

Having had enough by now, Hidenori tries to end the scene with a normal line, only to fail miserably. Tadakuni then appears. Reading the situation well, he brings up supermarket discounts (to defuse the atmosphere), earning him angry violent punches from the girl. In the confusion, Hidenori sees a manuscript fall out of her bag and realizes from its contents that she was writing a book, in which the situation was almost identical to the current one. The girl, red-faced, tries to grab her novel back, but he keeps it out of reach.

Hidenori realizes that she was trying to bring her romantic script to life and chose him as the protagonist, but doesn't like that he's supposed to be the real-life version of an "introverted, lonely otaku". Yoshitake finds it funny, and the girl wails in embarrassment.

The ending for this episode uses the lines from the 'wind' exchange between the characters from the last short, stitched into verse form. The song is titled 'The Literature Girl' and sung by ENA.

A short preview of the next episode plays, with the message “Next Time: High School Boys and the Morning Journey (and other sketches)”. Hidenori announces that random stuff would be coming up next week, before saying again that the show was brought to the viewers “lazily by the following sponsors”. Tadakuni, now agitated, tells him again to stop saying ‘lazily’.

A second message is shown on-screen: “Sorry, the ending couldn’t make it in time. Amesaki Annainin’s song ‘Ohisama’ starts next week. Look forward to it!”.

The end screen features a single large image of Yoshitake holding his school tie above his head with both hands, in front of a green background. The illustration is credited to the series author, Yasunobu Yamauchi. Next to this, below the series logo, is the text “See you again next week!”.

In order of appearance:

The credits play during the ending song. 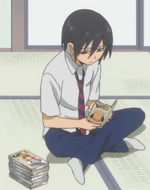 Retrieved from "https://dailylivesofhighschoolboys.fandom.com/wiki/Episode_1?oldid=10136"
Community content is available under CC-BY-SA unless otherwise noted.